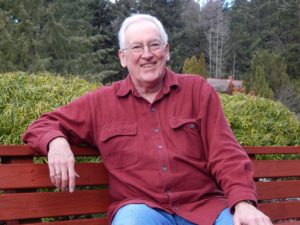 Being a pastor is my fourth career.  Prior to becoming a Certified Lay Minister with the United Methodist Church I was a Houston Police officer, a Criminal Defense attorney, a District Attorney in Texas and a Prosecuting Attorney in Washington State.  I believe my life experiences give me a special insight on the human condition.  I have seen people at their best and at their worst.  I draw upon my 25 years of jury trial experience in conveying the gospel message in a unique and engaging manner.  While I won’t give you legal advice, I can listen with an ear that has heard just about everything.  I like to tell people that if they aren’t into “Organized” religion, I’m their guy as I am not very organized and go where the Holy Spirit leads me during worship services.  Church should be both fun and fulfilling and we work very hard at giving you both. 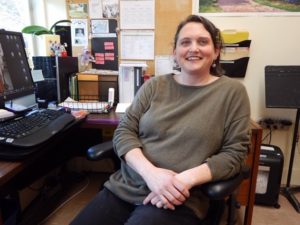 Melanie grew up in this area and graduated from Chimacum High School in the early 90’s. She earned her BA in Education from Central Washington University in Ellensburg (Go Wildcats!) and her MA in Teaching from Saint Mary College in Kansas. After several years of teaching she decided that it wasn’t what she wanted to do long term so after trying out many different hats, has since concluded that administration and customer service are her niche. She really enjoys helping others so she’s very thankful she has the opportunity to work and help out at CUMC.

Melanie and her husband, Jason, have been married since 2011 and adopted two beautiful little girls, sisters, ages five and nine, from foster care in February 2017. They are also the proud parents of furry “children” CG, a Pomeranian/Cocker Spaniel mix who is full of personality and two kitties, Bella and Sophia, who love to play and snuggle each other.

Melanie enjoys organizing, spending time with family and friends, bargain shopping, dark chocolate, and the new found joys of parenting. They’ve lived in Port Townsend since 2012 and are very excited to have purchased a house in Port Townsend in October 2018.

I was born into a musical family. My paternal grandmother played the organ. I and my 4 sisters were all given piano and other music lessons. When it came time to choose a college major, I chose music education. I taught classroom music and directed school choirs for a few years, but discovered I was not passionate about my work. I left my job and pursued other interests including earning a Masters Degree in Applied Behavioral Science.

Later in my adult life, I returned to playing the piano and taking lessons. The piano is my true musical passion. I continue to take lessons. I’m not aspiring to playing solo piano; what I enjoy is accompanying singers and instrumentalists. Thank you for offering me this opportunity to play in Community United Methodist Church. 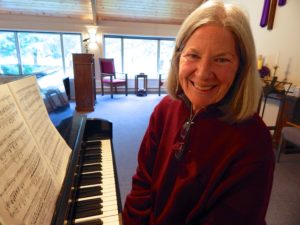 Sheila Harwood began her musical studies at the ripe age of 2-1/2, on her musician mother’s lap. She earned both her B.A. and B. Mus. Piano Performance under Bela Siki at the University of Washington; then while working on her Master’s, was handed a fulltime Teaching Fellowship. Following advanced studies with Gordon Green at London’s Royal Academy of Music, and with Jeremy Siepmann (future Music Head of the BBC), she returned home, one exhausted puppy. Sheila married and raised a family–a path infinitely more fulfilling and exhausting.

Through all of the exhaust fumes, Mrs. Harwood taught successfully for over 25 years, enabling scores of students to win scholarships, numerous of them to Ivy League schools. She served for 11 years as principal accompanist to a 1700-family church/school in Auburn, WA, as well. Sheila now has a lot of fun providing musical support to the vibrant, community-oriented congregation at CUMC. Very few exhaust fumes here.

Arrive early and join the early birds for coffee and conversation

Worship begins and after the Children's Sermon the kids are released to go to their Sunday School class.

Join us after the service for refreshments and conversation.